I have three cats. Oskar thinks he is a dog or perhaps our toddler, Puru is pure teasing kitten, and Betsy? Well, we are convinced she is an alien. I drew a comic illustrating some of the weird things she does, although I think I've only halfway captured it.

I can't really draw her tortie markings so I also provided a picture of the genuine article. 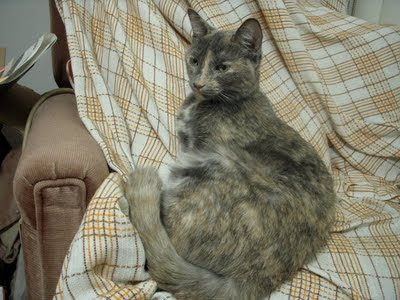 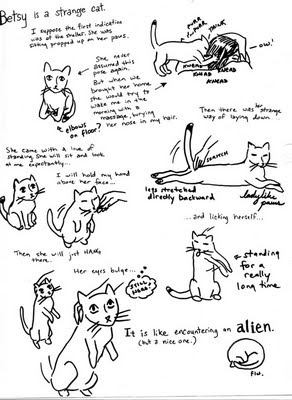 Click on the comic for a larger image!
Posted by jaclyndolamore at 7:16 PM 6 comments:

On the way to Dallas I had a terrifically reassuring seatmate. I began to relax. On the way back, the pounding panic came back during takeoff, especially since I had to fly American and they don't have satellite radio, but it was a very smooth takeoff, and once we hit 10,000 feet, I relaxed quickly and stayed astoundingly relaxed. Sure, I still got a tension headache by the time I got off, but at one point the plane was rattling a bit, I could see a lightning storm up ahead, and yet I realized I was just enjoying the show. With the Buzzcocks blasting through my headphones, my mood was a mixture of "this is pretty!", "F*#@ you, fear" and "Bring it ON."

(Luckily, nothing much ever was brought, or I might have changed my tune.)

Meanwhile, between these two flights was my library visit. It was not my most successful visit ever because the audience didn't really know each other, they were mostly in that most-nervous-age-of-your-life, and they didn't laugh at many of my jokes or ask many questions. "How can you DO that?" or "I could never do that" were reactions I got from several people about the idea of library/school visits in general and shy audiences in particular.

And I don't really KNOW how I can do it. I can look at an empty room of chairs and think, "I can see how this would be intimidating" and then I can see those chairs half-filled with staring faces waiting for me to entertain them with chatter for the next hour and think, "Yes, this would be a problem for some people, I understand completely", and yet, I'm just not afraid. I've even gotten better at just forging ahead when I ask if there are any questions and no one says a word. Okay, nevermind! I'll give you random writing advice. Or read an excerpt from Between the Sea and Sky. Do you like it, audience? Can I tell? You are so quiet!! Eh, too bad, you're getting it anyway.

When I was a wee kidlet I wanted to be a stand-up comedian. (Before I realized one would have to write one's own routine and not just repeat one of Steve Martin's.) I try to think of writer talks the same way. Good comedians are willing to humiliate themselves, and when things go rough, I just think of that.

But if I ever pee my pants on a turbulent plane, I'm not sure that'll work.
Posted by jaclyndolamore at 7:40 AM 3 comments:

Wow, it was really hard to pick top contenders for the Magic Under Glass embellished paperback. But I selected my three favorite reviews, and random.org sez:

She will receive an embellished Magic Under Glass paperback and a Between the Sea and Sky ARC.

Then, I numbered all the entries for Random.org to win a Magic Under Glass UK paperback and Between the Sea and Sky ARC and that winner is:

Congratulations to both of you and thank you so much for all the entries. I wish I could send you all ARCs, but I DO still have a stack to give away one way or another so stay tuned...
Posted by jaclyndolamore at 10:21 AM 4 comments:

Sorry I am late on announcing the contest winners. I have learned my lesson not to plan contests to end right before I go out of town for the weekend! I need to find a good spare moment to review the entries, so, early next week I promise!

In the meantime, don't forget to stop by and see me on Saturday if you're in the Dallas/Fort Worth area! Deets here:http://catalog.cityofirving.org/rooms/portal/page/24745_Author_Visits

It looks like the event IS open to everyone, not just teens as I previously stated. I'm so excited to see some Texan fans, so please come!
Posted by jaclyndolamore at 4:08 PM 1 comment:

Tasha Tudor and Shaping A Life

I reread The Private World of Tasha Tudor yesterday, a book that never fails to inspire me.

If you are not already aware of the awesomeness of Tasha Tudor, she was an illustrator and, well, what you might certainly call an eccentric. She believed she had lived before, in the 1830s, and still lived on a Vermont farm wearing 1830s dresses (some authentic), spinning wool, raising goats, cultivating a lovely garden, and doing all manner of artsy and folksy things...marionette shows, teas, dollhouses... She also had quite a collection of antique clothes and she believed in WEARING them to pieces, not packing them away. In the book there are pictures of young women and children sporting some of her Victorian clothing collection and lovely as they are, you can see a spot where the dress is disintegrating. I kind of love that.

Tasha says in the book, If I do have a philosophy, it is best expressed by Henry David Thoreau, "If one advances confidently in the direction of his dreams, and endeavors to live the life which he has imagined, he will meet with a success unexpected in common hours." (Yes, it's a quote within a quote, I know that's a little weird.)

And yes, I've heard that Tasha Tudor could be prickly or that her quaintness was calculated and commercial or that her children were fighting over her estate after her death or whatever, but...well, that sort of thing is their business. What I love about people like Tasha Tudor and David Bowie and countless other artists of the ages, people who were artistic eccentrics first and successful people second, is the important reminder that one can't just sit around and wait for an amazing life to be handed over to one. No matter how poor a person is, how small their home, how limited their time, we still have the power to choose a direction to head toward. We can gather bits of our dreams, cultivate them and let them grow.

As I read the book, I saw things I desire and still don't have...like a house of my own, in a state with seasons and history and fresh apples in the fall and cherries in the summer. But I also read about Tasha Tudor's Christmas tree, decorated with beautiful ornaments handed down from her great-grandmother, and I thought with a smile about my own collection of Christmas ornaments--shiny 1960s orbs from an estate sale in my neighborhood. A woman named Susan had died, and her taste was very like mine, and she had clearly traveled and had money. Her house was full of lovely things. I have several of them now. Sure, they aren't 19th century ornaments, but you can't buy them anymore (except on Ebay and such of course), and they have a history that I don't know but imagine I feel.

60s Christmas ornaments. Quirky shoes with a work uniform. Herbs grown on a stoop. An hour dedicated to writing or art or music. Fresh baked bread. Small things matter.
Posted by jaclyndolamore at 11:42 AM 4 comments: