The cover for book #2 of the Hidden Lands, The Stolen Heart, is out and about now! 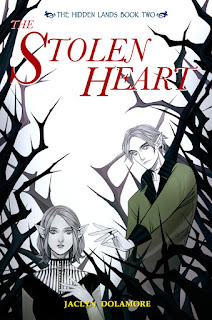 The daughter of a wealthy and corrupt businessman, Thessia lived a pampered life. But she has fallen for the one boy she can’t have: Lester Alamont, a talented young sorcerer…and a Fanarlem. Fanarlem, a highly realistic race of ‘doll people’ created by magic, were considered only fit to be a slave race for centuries, and to Thessia’s father, that’s still the only thing they’re good for.
Alfred Brawder, Thessia’s former fiance and the son of an organized crime boss, is trying to go straight by attending Thessia’s school—and he still wants to see her find happiness, befriending Lester and encouraging the clandestine relationship. But in the traditional world of Atlantis, forbidden allegiances quickly lead to violence, and for Alfred, keeping his hands clean proves harder than expected…

As much as I love book 1, I love book 2 even more because it progresses the characters emotionally so much!

However, I've been dealing with rapid-fire business decisions in my new indie publishing career. Recently I scheduled a brief 99 cent promotion. On the morning when I was supposed to go lower the price for the sale, Amazon informed me that my book file was too large to make into a 99 cent book! This is thanks to the pictures. I had to quickly hack 2/3rds of the pictures out of the book or the promised sale would never happen. Talk about painful, after all the work I put into them. The pictures are never going back in, because never being able to put the book on sale is just not an option...

At this point, I am generally faced with the tough call that the pictures are not paying for themselves.  Some of you loved them, and I love you for it because I was so happy doing them... But, I've learned that the story has to stand on its own and I'm sensing that very few people picked up the book just because of the pictures. I could probably write 1-2 extra books a year in the time it takes me to do the artwork, and I lose a substantial chunk of my sales on delivery costs. So, soon I will be pulling the remaining 1/3rd of the art out of TVH and offering ALL the art as a free extra. Subsequent volumes probably won't have art because I just can't justify the time to do it...but I do still draw all the time, just in a lot of more of a sloppy way, so I'll post that stuff around periodically.

I also had to face the fact that while I very much wanted to offer my book at all the major retailers on a philosophical basis...I have only sold a whopping one copy outside of Amazon in the past few months. So, the book is now exclusive to Amazon so it can benefit from page reads on Kindle Unlimited and the sales Kindle offers.

A part of me hesitates to talk about all this so openly. It sounds like a lot of "OOPS". But, part of the reason I liked the idea of going indie is because I DO like to talk about things openly, including business. I'm a Capricorn--business is my jam! (When my Capricorn sun is not being overruled by my quirky Aquarius planets and the tormented emotions of my Scorpio moon, that is.) And the cool thing about indie publishing is that you can observe what's working and what isn't and make changes.

With that in mind, I've also been wanting to write an adult fantasy romance because I think the market is stronger than YA, and in the past 10 days I've written almost the entire draft of one. Literally, the entire story hit me in one day and I've just been writing like a fiend ever since... I'm far enough along now (it will be a shorter book!) that I can say with certainty that I can release The Stolen Heart on June 10th and then The Sorcerer's Concubine on July 10th! It's still set in the Hidden Lands, but many years prior, so the feel is more high fantasy...it stands ENTIRELY alone from the main series but also sheds a lot of light on the situations in that series. And it has a few sex scenes, which I was very embarrassed to write, even though see above about "adult romantic fantasy" + "stronger market"...but I think the book would actually lose something pretty important without them. So I want to say this book is for adult readers, but then I am aware of the irony that most teenagers--in public school, at the least--probably still know more about sex than my homeschooled self...(really it's true...-_-;;;;;...I feel like no matter what I do I'm still going to get reviews that say "this should have been a middle grade!!")
Posted by jaclyndolamore at 7:54 AM 1 comment: