My new adult fantasy trilogy; The Vengeful Half is on sale; The Stolen Heart is out!

The Vengeful Half: On sale for 99 cents through June 16th!

I also quietly put the first book in my adult fantasy trilogy up for pre-order. This is a totally experimental project for me in imitating the Habits of Highly Successful Ebook Authors: trying to write "to market" quickly. But I also fell deeply in love with this story, Velsa and Grau and how they grow over the course of the trilogy which, I've already written in my HEAD if not entirely on paper... As I said in my last entry, it's still set in the Hidden Lands, but 100 years before The Vengeful Half. I have so many ideas for the sequel already. But I'm also deep into book 3 of the other series. So much to do!

This book is an adult romance. It has sex scenes. So if you're related to me, please don't read it, or don't tell me you did. And like, if you do, please just remember, I'm trying to make money here. =P 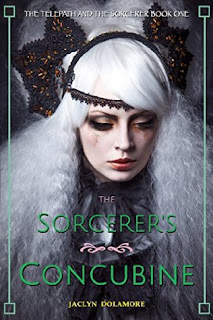 Born of wood, cloth, and a substantial dose of magic, Velsa is a Fanarlem, a beautiful artificial girl. Raised to be a concubine, she has seen her friends at the House of Perfumed Ribbons sold off to be the pets of wealthy men. Now her own dreaded day has come. Grau Thanneau is a kind and handsome sorcerer who expects to own a spectacular piece of spellwork--he doesn't realize that everything he has been told about Fanarlem is a lie. Velsa is not a dull-witted doll, but an intelligent and luminous soul who captivates his heart. Neither of them expected to fall in love, in a land where the law will never recognize her as his equal... When Grau brings Velsa with him as he serves in the border patrol, they encounter odd magic sent from the High Sorcerer's palace--or is it magic at all? War is brewing, and with it, the winds of opportunity. Velsa has powers of her own, powers no Fanarlem girl should have, but when the enemy attacks, she might be the only one who can stand against them.

I'm experimenting with offering this one for 99 cents during the pre-order and initial release.

More updates soon! I am trying to write this update while on a brief vacation to my parents' house in the Asheville area (and heartily tired!).
Posted by jaclyndolamore at 1:56 PM 1 comment: