When David Bowie died, so many people said they lost the Goblin King. Or a Starman.

While it isn't unusual for actors to be associated with their roles, Bowie went beyond that. Did we ever really believe he was from here? I'm not sure if he was from Faerie, or space. But he always made me feel like I had peeked past the veil of reality.

I'm sure his friends and family would probably insist he was an ordinary, if extraordinary, human named David Jones at heart...that all his personas were just roles and masks.

But a lot of performers have tried to present themselves as alien or magical. Few are so convincing. That isn't something you can pretend. It's just in you.

Bowie came to me, like an angel, at a time when I needed him most. It began when my cousin showed us the movie "Velvet Goldmine", based loosely and not entirely flatteringly on his life and personas. The movie led me to the real man and the first thing I noticed is that he looked just like my favorite of my own fictional characters, Det Arianni. Det was beautiful, weird, a little alien, a little androgynous but decidedly male, idiosyncratic and authoritative. I didn't think a real Det could exist. But I immediately realized that he DID...and by pure accident, they shared the same birthday.

It was like Bowie was in my head long before I knew who he was.

I was 20 years old, thereabouts. Newly adult and confused about how to make it in the world. My parents had taught me a lot about life but they hadn't quite taught me how to be an ARTIST. How to bridge that scary thing of putting your soul on the page, and then sending your soul out to be judged, rejected or accepted and given a monetary value. I was lost in my dream worlds, while the real world seemed mundane and a little depressing. My self-confidence was somewhat shaky.

"Oh no love, you're not alone! You're watching yourself but you're too unfair, you got your head all tangled up but if I could only make you care," he sang. "All the knives seem to lacerate your brain, I've had my share, now I'll help you with the pain...you're not alone!"

Bowie made me more brave, and more confident, and more proudly weird.

Many gay kids of the 1970s have said how much it meant to them to see Bowie invading their suburban television sets. In the early 2000s, that vision was still pertinent. I was a girl who identified most strongly with my male characters. Who liked dapper male clothes. I was attracted to guys, mostly, but not the typical ones. At the time the spectrum of sexuality and gender identity were barely spoken of and I didn't know that was an okay way to be, but when I saw Bowie I knew it was.

Few and rare are the people who can truly help others be more themselves, without ever meeting them.

Only for a short time was David Bowie my favorite musical act. After some listens of Roxy Music's "Stranded", my ears fell hard for Bryan Ferry. (Bowie is still #2, everyone else far behind them in the rankings.) But I won't mourn Bryan the way I mourn David. Bowie was more than his music. He was a rare mind. A fashion icon, a visual artist, an actor, a voice who inspired countless other artists.

It is said that the music video "Lazarus" was the last thing we left us, a dark musing on death. But really, it was this photo, wasn't it? Bowie was dark, but he could also be hilarious. Taken two days before his death, the last thing we will ever have from Bowie is a smile full of humor and joy, that seems to say, he is all right...

...and the song goes on forever. 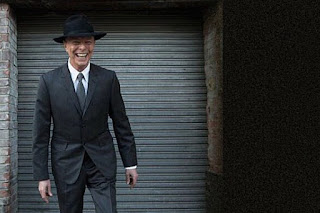 Posted by jaclyndolamore at 10:39 AM 2 comments: