Shadows on the Moon review 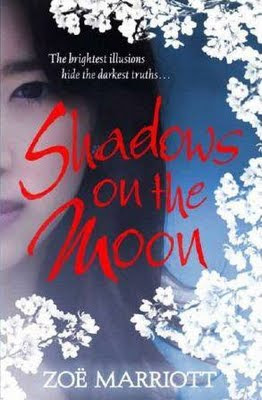 Today I am posting a rather overdue review of a lovely book, Shadows on the Moon by Zoe Marriott.

Zoe and I are Twitter friends, and some months back, she proposed a swap. She'd send me a Shadows on the Moon ARC if I'd send her a Between the Sea and Sky ARC when I got them. Despite the expensive postage to England, it's still a sweet deal because we get to read one another's books early.

And this is a LOVELY book, kind of a Japanese-flavored Cinderella. Let me tell you some of the many things I loved about it!

--The prose. It's simple yet lyrical, the perfect fairy tale pitch, especially for a Japanese fairy tale. The prose kind of FELT like Japan, if that makes sense.

--Suzume. She's a strong heroine, tough but still feminine. She goes through a LOT and I really felt for her. Just when I thought she was in a slightly better position, the rug gets pulled out from under her again. One thing I thought was fascinating is that she using cutting to cope with all she's going through in the book. This isn't played up TOO much but I can't recall ever seeing this addressed in a historical fantasy. Or actually any historical OR fantasy. It's nice to see heroines with "issues" branching out of issue books, that's for sure.

--The world. It's not QUITE the Japan we know, more of a fairy tale Japan and a fairy tale court, and it is lovely. Dark-skinned foreigners come from another land as guests of the royal court, and although we never see this land, the culture and people feel well-realized too. The love interest is a part of the foreign party, which brings me to:

--Otieno. He could have had even more screen time in my opinion, but still, it was enough, and he made a compelling impression when he did show up. He came across as strong yet gentle and I feel like he had a real sense of presence. One of my pet peeves in a book is multiple description of hot abs or pouty lips as stand-in for character in a love interest (especially my personal boy preference is skinny rock stars...hot abs and pouty lips won't get me, although I admit to being kind of a sucker for nicely described hands for some reason). There is none of this here. Yes, you'll see some physical attraction to Otieno but it's more than that.

Also, bonus points for dance, music, riches to rags to riches again which I always enjoy, and a transgender character.

If I have one quibble it's that the pacing does drag in a few spots, particularly around the end when the heroine is making certain choices for revenge and honor and you KNOW she's going to end up going a different route in the end. Although I think this made sense for her character I'll admit to getting a little impatient with her at that point. For god's sake, woman, OTIENO.

This is a wonderful read and I really think it will appeal to Magic Under Glass fans as it shares some themes. It releases in the UK in July (and you can always get UK books via The Book Depository although don't wait as I notice they tend to run out of them sometimes, grr) or, I believe, a little later in the US.
Posted by jaclyndolamore at 8:59 AM 5 comments:

Between the Sea and Sky bits and pieces

Between the Sea and Sky was at BEA! I know there are a decent amount of ARCs trickling out now, and reviews too. My critique partner Jessica Spotswood compared it to a "fantasy L. M. Montgomery" on Twitter the other day. I promise I won't spam you with review quotes, but, this is why you always hurry up and send your dear friends ARCs before anyone else, because they like you and they will probably like your new book, so that by the time the first bad review comes along, you have kind words to CLUTCH.

Anyway, I've done a few a Sea & Sky guest posts I wanted to point you to:

At Windowpane Memoirs I talked about the setting of Between the Sea and Sky.

She's also running a contest to win a copy, so check that out. You can also win a copy at my post here:
http://jaclyndolamore.blogspot.com/2011/05/m-is-for-may-and-magic-under-glass.html. It runs 'til June 7th and your odds right now are very good!

And I've got a Goodreads giveaway going on. The odds are not quite as good of course, but entering couldn't be easier!

And this post is already a month old, but I never mentioned it here...at The Book Rat I talked about how I drew from fairy tales for world building mermaids, and how I developed the winged folk (who didn't have much in the way of myth to draw from).

Okay, so this is a bit of a cheat-y post, but my hands hurt and I have synopses to write, so...it will have to do for now.
Posted by jaclyndolamore at 7:20 PM 2 comments:

Here is the news, coming to you every hour on the hour...*

...or every month or so, at no particular time. You know!

Sometimes when people are looking for an agent or waiting to sell, they complain about how long it takes. It took me three years to find an agent. But the whole time I was dabbling in various projects. This particular novel I just finished? I started it back in August of 2006.

"I have a constant need to play with fresh ideas. This one has been percolating for awhile and I finally had a chance to work out the plot and character basics today. My #1 setting I wanted to play with was a domestic Victorian one. Done and done! #2 on the list is sort of a dark Germanic art deco, so I fired up my Klaus Nomi and my Gary Numan on the old iTunes and started taking notes."

I wrote a partial, then had no idea where it was going and set it aside. For years! I wasn't ready to write it until I had a few other books under my belt. It only took me four months to write, which sounds so fast (unless you're one of the HYPER-FAST writers who churns out two tomes a year), but the reason it was so fast is that I've been THINKING about the darn thing for almost five years, and researching it for the last year.

Plus Dade had some particularly awesome plot assistance ideas this time. I didn't get stuck much. Yay!

Now I can get back to some lighter works, which I'm also looking forward to. And I can stop listening to the soundtrack of Metropolis. Which I LOVE, but seriously I am so over it.

I am delighted to report that I'll be doing a library visit at the West Irving Library in Irving, TX on June 11th at 1 pm as part of their teen book club, so if any of my teenage fans are in the area, please drop by!

I'll also be returning to the science fiction convention Oasis here in Orlando the last weekend on May. I must say this is really an old-school sci-fi convention so I wouldn't attend just to see me, unless you are into old-school sci-fi yourself. But I do enjoy being on writer panels, so I like going anyway.

Lastly, the Magic Under Glass paperback hits shelves on Tuesday, and I know some of you will be at BEA at the time, perhaps picking of an ARC of Between the Sea and Sky! I wish I was going, but I can't wait to hear the reports.

*Total bonus if you know the song with these lyrics in it. I'm such a nerd.
Posted by jaclyndolamore at 11:24 AM 5 comments:

Email ThisBlogThis!Share to TwitterShare to FacebookShare to Pinterest
Labels: news

M is for May and Magic Under Glass Contest!!

That means the Magic Under Glass paperback will be available in three weeks! And I just got my first official paperback in the mail. It is pretty! It has a Between the Sea and Sky teaser inside!

So, I want to have a contest for FANS of Magic Under Glass. All of you guys who have read the book and talked about it have my gratitude. But what can I give you? I can't just hand out paperback copies because obviously you've already read it. But I can give out an extra-special copy. So, the grand prize winner of this contest gets:

--A paperback copy of Magic Under Glass laden with sketches of all the characters and handwritten notes about the writing and research and maybe a couple of hints about what happens in Magic Under Stone!
--AND, an ARC of Between the Sea and Sky!

There will also be a runner-up prize of a signed UK copy of Magic Under Glass with a sketch of Erris and Nimira in the front AND, an ARC of Between the Sea and Sky.

How do you enter?

Well, there are two ways. Write a review of Magic Under Glass and post it your blog that mentions the paperback is coming out May 24th (if you don't have a blog, I'll also accept Goodreads or Amazon, in which case you don't have to mention the release date), OR if you have already written a review, make a post that mentions the paperback release and links back to your old review.

OR if you aren't the reviewing sort, you can create any kind of show of love for Magic Under Glass: fan art, fan fic, animation, movie, collage, doll, performance art, Erris-trapped-in-clockwork mime on a street corner, WHATEVER.

Other details:
1. Contest ends June 7th.
2. International entries are welcome! However, it is really expensive to ship overseas and I am kinda poor, so international winners will have to choose between having the first prize shipped now, or both prizes shipped around the release of Between the Sea and Sky.
3. Can you enter with a less-than-positive review? Yes. I don't want people to start freaking out about their reviews having critical comments. Thoughtful reviews are always appreciated even if they are mixed.
4. Can you enter more than once with say, a review and fan art or whatever? Well, sure! That would be awesome. You are welcome to enter up to three times with a review and/or different fan works, and I'd be surprised if anyone wanted to enter more than that anyway...
Posted by jaclyndolamore at 1:48 PM 17 comments: