The Takeaway from Downton Abbey

Behind most of the writing world, I am finally watching Downton Abbey. I had heard SO many accolades and recommendations for this show, I have to admit I was expecting something different. Something with really realistic dialogue and breathtaking plot construction. Now, don't get me wrong, it has much to recommend it, but it is a pretty-looking soap opera with really superb costuming. (Seriously...give me all Edith's clothes! Just the fact that they gave everyone enough different styles that I want Edith's clothes but not Mary's or Sibyl's is commendable.) 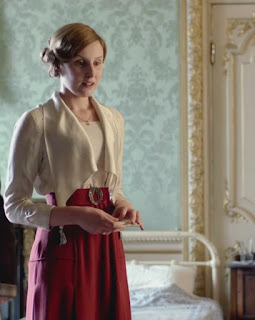 Throughout the show I find myself pausing to mutter over the incredulity of many moments, such as the wonky timelines (suddenly they say months have passed and yet all the character plots are EXACTLY where they left off), or the fact that characters are constantly exclaiming things like "TIMES ARE CHANGING!!" or some unbelivably prescient remark, or that aggravating thing when characters don't tell each other things just so the drama can be ratcheted up a notch.

However, now that I understand what I'm in for, of course I'm hooked. I mean, I never miss an episode of Once Upon a Time. I can't exactly bitch about some writing missteps.

But this reminded me, once again, of another shade of the same idea that I spoke of in my recent Skip the boring parts post. If you are writing commercial entertainment, your number one objective must be to tell a good story. I know that, like many of my writing peers, I spend a lot of time making sure that my timelines are correct, that I have done my research, that my characters aren't absurd and my situations aren't unbelievable and I don't have tension simply for tension's sake and I haven't committed the sin of cheesiness and the list goes on and on. But in the end? This year I have been emphasizing entertainment above all else. Lit by Shadows was bought along with a sequel, and that's a first for me. I want to keep people up at night. I want to write a book that makes you want to preorder the sequel. I'll confess I am not ENTIRELY sure how to do that. But I am making it my priority to try.

Tension for tension's sake? Maybe better than no tension at all.
Cheesiness? Still maybe better than a scene of realistically rendered parliamentary procedure.
Unbelievable situations? Just why ARE we escaping into books anyway?

It isn't like I suddenly intend to write a poorly researched and improbable mess, heavens no, but questioning my *priorities*? Absolutely. And sometimes these lessons are actually easier to learn from something that is flawed but delightful, rather than something told so smoothly that I don't even think about it.
Posted by jaclyndolamore at 1:51 PM 3 comments:

For the first time in my life, here in Maryland, I can say I am a TINY bit tired of winter. Of course, not as much as I'm dreading summer. Florida girl's had enough summer to last for years. I was looking at my last year of pictures and this one was from mid-March: 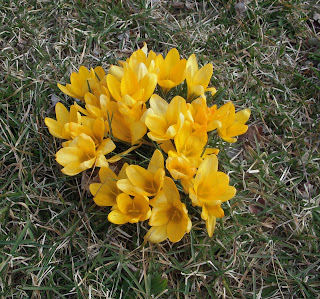 I'm looking forward to seeing those again. But it is funny, we had just moved and I wasn't like, "FLOWERS!!" I was more like, "Wow, pretty things are growing in my new yard!" It's all very relative. There are always flowers in Florida.

Winter has many delights, though. A warm cup of cocoa in the morning, climbing under a feather-stuffed duvet at night, long quiet nights with the space heater for writing, dancing flakes of snow (though we only got one good snow this year), exceedingly cuddly kitties.

What I actually miss more than warmth is fruit. Of course, February and March aren't good months for fresh produce no matter where you are, though in Florida we do get those honey tangerines that are my FAVORITE. Local farms around here are still providing us with a lot of root veggies: in the past month  I've eaten pounds upon pounds of turnips, red turnips, beets, celeriac, Jerusalem artichoke, parsnips, carrots, sweet potatoes, and potatoes. They are delicious, roasted in medleys in big pans with sliced onions, salt, and seasonings. But how I am dreaming of strawberries, fresh peas, asparagus and garlic scapes...
Posted by jaclyndolamore at 10:23 AM 1 comment: