Between the Sea and Sky is out!

...and I am quite behind on the blogging I wanted to do. I've been in Maryland for almost two weeks to buy a house! Maybe. We found one we liked but tomorrow is the inspection, where ALL OUR DREAMS COULD SHATTER. Although buying a house is pretty scary, so in the dead of night sometimes I want my dreams to shatter. Except, like all proper dreams, one must proceed forward. Kind of like writing. A LOT like a writing career, actually. Tense waiting for phone calls. Elation followed by awareness of sudden responsibility...

It's a big, beautiful, Victorian house. The kind of house I always imagined ALL writers must live in when I was a kid. But I come from Florida where nearly all houses are new (and according to a recent article in Huffington Post, 58% or something are behind on their mortgages, whee!) so it has taken some getting used to being up here where almost all houses are old!

Anyway, while I was up here I signed copies of Between the Sea and Sky at the Barnes and Noble in Bel Air, MD. If you're looking for one. They only had three, I don't know how long they'll last.

Between the Sea and Sky has also been getting great reviews, and I am so happy that some readers really seem to be enjoying it. My publisher has set up a ton of blog interviews with me, so if you want to know more about it, you'll be able to find me just about everywhere in the next couple of weeks. Thanks to all reviewers, interviewers, and readers for your support!

Although if someone wants to be nice and give it a 5 star review on Amazon, I will give you a virtual hug. Right now it's almost all 4-star, which is a great review, but aww, the 5-star category looks so lonely... *pathetic moment*
Posted by jaclyndolamore at 7:43 PM No comments:

Launch Party in Orlando (not mine)

My friend Jessica Martinez, author of Virtuosity, is having her launch party this Tuesday! This book has been getting great buzz! It'll be at the Waterford Lakes Barnes & Noble at 6:30. It should be fun!

Also, I got Magic Under Stone ARCs. A TON of them. I've already spent hundreds of dollars mailing out Between the Sea and Sky ARCs, so I stared at these with a mixture of excitement and...horror. So, I will be toting them around everywhere I go. Well, at least everywhere book-related I go. I'll have a few at this launch party. Come say hi to me and buy Jessica's wonderful book, and I'll give you a Magic Under Stone ARC. (Quantities limited, because I don't expect anyone to really show up. I think maybe three central Floridians look at my blog every week...)

Stay tuned to this space for my Between the Sea and Sky prequel comic strips! Yessss.
Posted by jaclyndolamore at 10:13 PM 4 comments:

Email ThisBlogThis!Share to TwitterShare to FacebookShare to Pinterest
Labels: events

My grandfather is dying. His mother is turning 100 next month. Only in the last couple of years, her memory started to go and was put in a nursing home. I was thinking about all of this last night, and how when someone lives to be 100 and their mind slips away, it's not the same kind of mourning.

I was talking to my dad about how I've been watching that Prohibition documentary on PBS, and while I watch, I feel like I can see my great-grandmother in the old footage. She would have been a teenager during the 20s. It occurred to me that because of her, the 1920s feels like as far back in time as I can really get a hold of. The 30s, 40s, and 50s, too, I wasn't alive of course, but I can imagine what they must have been like because I can close my eyes and see myself as a little kid at a family clambake, with all the old people around, I can hear their Ohio accents, and the sound of my grandfather playing the organ. I can see the decor in their houses, the bowl of soft mints, the offered bowl of cheap pretzels. I can imagine the joking around. And the alcohol. It might have been the 1980s, it might have been Florida instead of Ohio, but I think those dim memories probably had the same atmosphere as what I see in old pictures.

I remember it, but it's gone now. Gatherings aren't the same. They don't happen as often, and when they do, the mood isn't the same. The old people of my childhood have gone, and now my grandparents, who were not really that old when I was born, are now the old people. I was never that close to my dad's parents or my great-grandmother, really, not enough to have a ton of personal memories of them, but I do feel really sad for the whole atmosphere of their lives passing on.

When you're a kid you take it for granted, you have no sense of history. You don't ask questions, so you only get family stories if someone volunteers them. I think I'll always wish I knew more about my relatives, as they go. But a part of me still knows a time and place I never lived through, because it swirled around me when I was just a little girl. 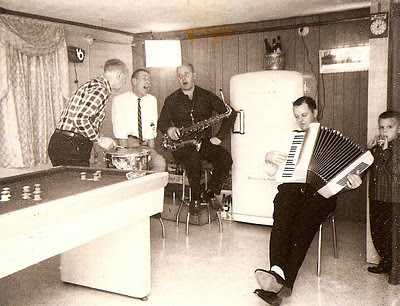 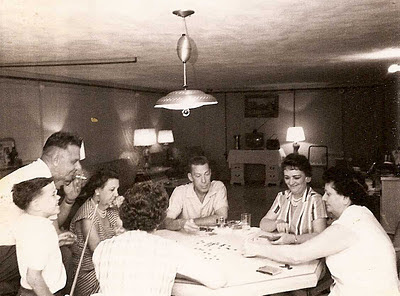 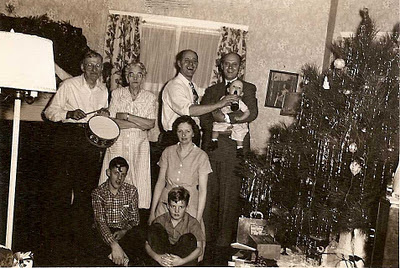 Posted by jaclyndolamore at 10:09 AM 8 comments:

The worst hot dog ever

There are some authors who always have hilariously awkward stories about their lives. I love stories like that! But I rarely have them because I rarely go anywhere.

Well, last weekend I went with my sister to an indie craft fair where she was selling her art. This craft fair had one food vendor (besides people selling the ubiquitous hipster food of the moment, cupcakes) and it was a hot dog cart. Being trapped at a table for about 8 hours as we were, we got hungry and needed food from said hot dog cart. There was always a huge line, but eventually we got so hungry I was willing to brave it.

I got down the stairs and forged through crowds of people to the cart only to be told it was closed for their lunch break and would reopen in 20 minutes. About 40 minutes later (we could see it out of a window behind us) it actually opened. People lined up. They'd been waiting for hot dogs. I watched the line, focusing on a man in a red shirt near the back for visual reference. 20 minutes later, THAT MAN HAD NOT MOVED.

What were these hot dogs, I wondered? Were they grinding the meat themselves? But we were SO HUNGRY. I got in line. I was about the 10th person and after a bit I calculated that it was taking them 5 minutes for each individual hot dog.

I still don't understand. Did they have one teeny tiny cooking apparatus that could only make one hot dog at once?

I waited 40+ minutes to near the front of the line. I was almost there when they said they were out of buns and were going to shut down.

"Can I just get a hot dog without the bun?" I cried, in anguish. If you've ever known me when I'm hungry, you'll know I'm good at crying things in anguish. The man in front of me, slated to have the last bun, refused his hot dog, said I could have it, and walked off. ! Who says chivalry is dead? But I had no bun for my sister, who was perhaps even hungrier than me. I had to bring her a (veggie) dog rolling around in some mustard and ketchup.

The hot dog itself was perplexing. The bun itself had been cooked, inside and out. Although one of the main points of a bun really should be to protect one's fingers from hot dog grease, no such luck here. The bun was greasy and toasty. It was a cheap, sickly sweet store brand hot dog bun with an equally bad hot dog inside.

Guys, I'd forgotten how bad hot dogs can taste. At home I always buy Maverick Ranch lean, low-sodium, flavor packed natural humanely raised beef hot dogs and heap them with Bubbie's fresh sauerkraut (or now, the yummy sweet-hot pickles I bought from a booth at the craft fair). My sister's smelled like it was probably a TofuPup. I can't believe I paid $5 for that.

If I could go back in time, I might've lived on the cupcakes after all.

In other news, Between the Sea and Sky is on NetGalley right now, so if that's your thing, you can find it there!
Posted by jaclyndolamore at 4:54 PM 4 comments: