It's near the end of May, which means one of the hottest book events of the year, Book Expo America, is underway. If you're at BEA, you are probably having a TOTAL BLAST (whenever you're not overwhelmed, hungry, sweaty or lost).

If you're an author or otherwise heavily invested in the book community, you're probably feeling a bit glum and, if you know what's good for you, avoiding Twitter.

Because chances are, right now someone you know just picked up an advance copy of your favorite author's new book that doesn't come out for seven months and now they are, like, having chocolate at Jacques Torres, and they're tweeting every detail and photo. It's horrible, don't look.

Every year loads of authors sign at BEA. I've been to BEA twice, myself, always on my own dime (well, kind of...remember that year I crashed four different people's hotel rooms? yeah, I'm still pretty proud of my shameless cheapskate skills on that one) and without being invited to do a signing or go to a publisher party or anything. This is quite normal, tons of authors have never signed at BEA, but I'll admit I always get a case of the "I just want"s.

"I just want to be invited to sign at BEA...once!"

This is, of course, complete nonsense. No one ever gets invited to sign at BEA and then says, "Wellp, I'm good." Unless they are so introverted they hate any kind of attention at all. But usually even introverts enjoy a moment in the sun. Attention is kind of like sugar; you probably got introduced to its addictive properties at a fairly young age and while you might get burned out on it, you'll find yourself wanting it again before long. Writing is, in fact, full of "I just want"s:

I've achieved a couple of these, and yet when I catch myself thinking about external markers of success I feel just as despairing as I did when I hadn't sold a book at all! I'm sure this probably goes for other things in life as well, anything that is really important to you. I actually skipped BEA this year mainly because I've been so busy working on two projects that mean a lot to me. I don't want to take time away from them. I miss New York City and all my friends, but this year I'm trying to focus on two things: taking joy in my work, and getting it done.

I do, however, give myself full permission to eat fancier-than-usual chocolate this week!

Posted by jaclyndolamore at 6:53 PM 3 comments:

I did a video chat recently with some lovely homeschooling/unschooling moms in Spain about my experiences with my unschooled/homeschooled background and navigating the world of adulthood post-untraditional education. The interview is in Spanish and English...which made it a little awkward for me, since sometimes I had trouble thinking in short bits to be translated...but I still enjoyed it very much and I hope it was helpful to them!

I am occasionally approached by people with questions about homeschooling, so I'll put it out there again, that if you have any questions feel free to ask and--time allowing--I am also happy to chat with any groups who associate themselves with free schooling without charge, as it is a subject close to my heart!
Posted by jaclyndolamore at 4:21 PM 3 comments:

Sketches for the day

From the Hidden Lands novels I am working on now. Sometimes these random moments pop into my head. This is Alfred, eldest son of a "potions Mafia" boss, and his right-hand man George, who is a faithful bodyguard but would nevertheless rather do almost anything else... 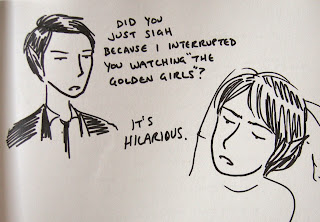 A color sketch of Det Arianni, one of the pivotal figures in the series. He is one of the most notorious people in the Hidden Lands but so often I draw him chopping vegetables. That's probably what he's doing here... Playing with Copics! (And I do mean playing. I don't know WHAT I'm doing.)

Just a quick heads up that on June 23rd at 7 pm, I will be doing a YA Author signing event at the Ivy Bookshop in Baltimore, MD with fellow YA authors Leah Cypess, author of Death Sworn and Mistwood, and Martina Boone, author of Compulsion. I'm not having an official "launch" for Glittering Shadows, but it comes out just about a week before this event, so I'm going to be feeling launchy.

I don't really know what that means. A craving for attention and cupcakes? (Note: I will not have cupcakes. I'm not that organized.)

I hope to see some of you there! As always, come to a signing and get a sketch of a main character in your book. 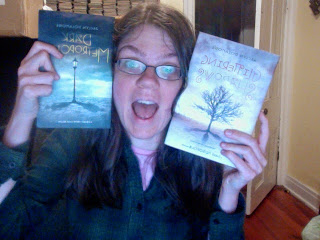 (I know what you're thinking. Jackie, stop dressing up SOOOO glamorously for your promotional photos! How can mere mortals compete with your acne and flannel? Weirdly, acne and flannel is pretty much the description of every boy I had a teenage crush on.)

Let's look at that Glittering Shadows cover by itself! I love it SOOO much! 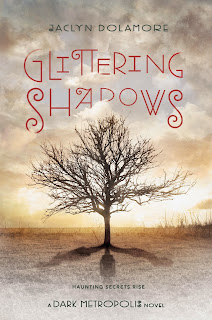