On (Sort of) Leaving Social Media

A month ago, I walked away from social media. I wasn't planning on it beforehand. In fact, if you'd asked me a month prior if I could live without Facebook I might have said, "Never!!"

Basically, I kind of snapped. I started doing all the things I never do and never should do. Arguing about politics. Arguing about stupid stuff. Arguing with friends. Crying about internet dramas I was not involved in.

I think a lot of us have sensed that the internet just...isn't the fun place it used to be. Back in the 1990s it was actually ANONYMOUS. That's crazy. Now the internet often feels less anonymous than real life. Then I remember the Livejournal and blog days, when social media consisted of people writing long posts in their own words about their lives. I still miss that.

When Twitter and Facebook happened, we suddenly had the ability to connect with a much larger group of people, and faster. And we are now able to share things with a click. It's been great for spreading important information...and also makes it easy to spread misinformation, rage, and stupid stuff. Even the harmless stuff often seems like an unnecessary part of life. (Why did I spend three minutes watching a cat video while ignoring my actual cats??) For over a decade I have started my day by checking the internet. In recent years I've noticed that inevitably one of the following happens:
--I spend too much time clicking on dumb articles. Where did my morning go?
--I see something that deeply upsets or scares me. ("Scientists say butterflies will be extinct in 2 years if you don't sign this petition!")
--I see something that angers me that I want to argue with, but I usually don't, because arguing on the internet has never made my life better aaaaand I'm not sure I've ever changed anyone's mind either.

It also has made it really easy to communicate in groups. For a fairly shy, socially insecure person like me, this has made it easy to talk to others. It feels safe to make a post to a group in general and comment on other people's posts. But I started realizing over time that my individual, private communication with other human beings was down. Like, WAY DOWN. Like, 85% of my interaction with other humans, besides the human I live with, was in a semi-public text-based group context. When I did have something I wanted to talk privately with someone about, I became paralyzed about which friend to choose, because I was so used to just posting to a group and not reaching out to a single person. WHAT IF THEY DON'T REALLY WANNA BE MY FRIEND? It was easier not to try.

For creative types, there is also the failure-ish feeling of signing on and seeing everyone else's good news, day after day. Logically, we know that when our fellow writers have great news, they post about it 99% of the time, and when they have bad news, they post about it, like, 5% of the time. It isn't true that everyone else is more successful than you. But it is still emotionally difficult to be bombarded with it every day.

I've realized lately that I have been a lot more depressed in recent years. Sluggish. Disconnected from my magical worlds and close friendships. Always short on time for doing the things I love doing, like reading...but also sometimes unmotivated to even do the things I love. I have long sort of suspected that social media is a contributing factor, but I was afraid to leave. "What if I lose all my friends?"

That 6 pm rule, especially, improved my life immediately. I've had more energy to cook good food and keep the house clean(er...). In the last month I've finished two 500+ page books and several smaller ones, and I've had time to beta read for people too, while also getting more of "the day job" done. I've been more cheerful. And I've definitely been MUCH more creative. I've stopped scrolling through Facebook and Twitter. I glance at the top of the page and freely block anyone who stresses me out even if I like them. Mostly I just chat or email my friends. I was surprised that my social life didn't seem to suffer at all. In fact, I think I've gotten closer to some people because of it and I really hope that continues, but I think the lonely times may prove easier to weather because, most importantly, I've felt way more connected to that world beyond this one, where stories whisper in my ear. Since I've forbidden myself to write in the mornings either (no computer, not for any reason!) I've been spending a lot of my mornings sketching and I think even just that act unlocks many things in my mind.

I'm not telling you this to convince anyone to leave social media. It can be an amazing tool and I have so many good friends because of it. I'll certainly be making use of it again in the year to come, as I have some Secret Projects cooking I am bursting to talk about. But it can also be very, very addictive.  A balm to loneliness that doesn't really solve a damn thing. It can start to feel like the virtual life is the real one, especially if you work at home and don't live near any real life friends and family, as I do. If you're starting to get a deep down feeling that this place isn't healthy for your soul, I encourage you not to waste any more of your time. Put down the screen and go outside. The butterflies aren't dead yet, no matter what Facebook tells you.

Posted by jaclyndolamore at 6:03 PM 12 comments:

Shane at Itching for Books was kind enough to set up a blog tour for Glittering Shadows for me. Although the book came out in June, I have much more time to talk about it now, AND, honestly? It's a very October-ish book if you ask me. It takes place across the fall and winter...and it's creepy.

I'll be linking to the giveaway and posts as they go up, but here is the sign-up if any of you who blog would like to participate: Glittering Shadows Sign-Up 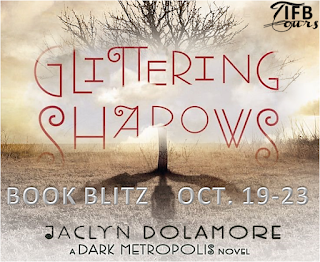 Speaking of Halloween, I'm currently working on a middle grade about witches, and it involves a Halloween dance! So I'm feeling very Halloween-ish this year. It's rare when my writing actually matches the season so well. Sometimes I feel like I'm always writing about winter in the summer, and summer in the winter. Which maybe isn't so bad, as I tend to wish for the opposite when it's TOO hot or cold, but when it's October? I don't wish for anything else. I hope you're all having a lovely autumn too.
Posted by jaclyndolamore at 8:03 PM 1 comment: