Self-Publishing, One Month In

It's been a little over a month since The Vengeful Half came out, and I decided I wanted to be a bit transparent about the process, because the more I learn about indie publishing, the more I realize there is a huge divide in perception and knowledge between traditional and indie YA writers. Many traditionally published writers know almost nothing of the indie market. This includes me, and so self-publishing was a very scary prospect to me! But, I'm learning more all the time and I'd like to pass it on.

There is a lot of info on starting out as an indie publisher from scratch. And there is also a lot of info on traditional publishing. There is NOT much info about hybrid publishing in the YA market. Even less so because the indie published works many YA hybrid authors publish are things like tie-in novellas, short stories, or sequels their publisher turned down. The data on launching a brand new series is almost nil. Would my prior published books give me any kind of advantage? I had no idea. I suspected the answer was "very little" because my most successful book released 6 years ago, and most of the bloggers and such who loved it are not blogging anymore. (Some of them are now writers or publishing professionals themselves!) I have also taken a lot of social media breaks and basically been terrible about retaining fans. Part of the reason for this was because all through my traditional publishing career, the Hidden Lands books have burned inside of me and I really wanted to talk about THEM, not the books I was selling. This is an awkward way to maintain an "author face". So I am hoping I will be able to have a more consistent presence now, but either way, I don't have a lot to draw from.

I put the Vengeful Half up for preorder about a month before its release on March 10th. I blitzed all my social media with the announcement of the Hidden Lands series. Between Twitter, Facebook personal and fan page, Blogspot, and Goodreads I have about 4,500 followers. It sounds like a lot, but that number is misleading, because a lot of them come from my YA author "boom era" when Magic Under Glass and Between the Sea and Sky came out, 2009-2010, and are not fresh followers who have had a recent interest in me. And also, of course, there is a lot of overlap. Once I had announced the series, I emailed a slew of bloggers offering review copies to try and get some reviews. I put up a LibraryThing giveaway for e-ARCs, a Goodreads giveaway for a paperback, and I purchased a 1-month NetGalley Co-Op for March. Much of indie book success seems to hinge on paid advertising, but I did no other marketing because I decided to save any paid marketing for book 2. Since I don't have a lot of money, I want paid advertisements to be able to benefit from sell-through into a second book. Some of the paid advertising sites require a certain number of reviews so I decided to focus on getting reviews instead.

I launched the book at $4.99 and decided to go wide, putting the book in Apple, Kobo and B&N, rather than keeping it exclusive to Amazon. Most of my sales occurred on the day I announced the series and on release day. Then I went almost a week with no sales at all, so I dropped the price to $2.99 to see if that would help, although I did it quietly because I wanted to measure organic sales, not sales from friends. At first, no change but then I went a week with 1 sale a day. At the 1-month mark, I have sold almost 50 books, of which 14 were paperbacks, most were at $4.99 and about 7 were at $2.99. Several of my sales were to Europe including two of the paperbacks.

Was it what I expected? Yes, it was about what I expected. My book is not written to market, or marketed to market, nor was it advertised or put on sale, so I didn't expect many organic sales, but I did definitely get a few, maybe to my pre-existing fans though. A lot of people, including me, don't buy series until they are farther along, so I expect a decent chunk of people are just waiting for me to write more.

The hard part about indie publishing is all the choices, entirely in one's own hands. All of my regrets are huge "MIGHTS" because if these other paths wouldn't have ended up being successful, I would have regretted them even MORE because they weren't my first instinct. But, I might change the way I do things next time due to results. --I may consider more "typical" covers. When I commissioned my covers I wanted something that captured the anime/magical Mafia feel of the books, looked cool, and made for a nice thumbnail. But I have since learned that the most successful indie books tend to look like every other successful indie book. Unique is not considered a virtue. So I am always second-guessing my covers. On the other hand, you know, I REALLY wanted to like my cover and they were cheap, and it's not like every book with a typical cover sells either, so...who knows.

--I think I maybe should have launched at 99 cents and booked a few cheap promos. I probably wouldn't have made much on them, because of the lack of other books in the series, and I would've lost some money from my loyal readers buying the book at 99 cents instead of $4.99, but I could've gotten the book a little more traction for a stronger book 2 launch. On the other hand (there's always that), why rush? I have 4 more books in this series, 4 more chances to promo and benefit from sell-through immediately, so patience is perhaps a virtue.

--Should I have done a pre-order? I didn't get any rankings boost on Amazon when the book came out because most people had already bought it, and that wasn't great, but...it was probably good to learn the process with a pre-order. In the long run it doesn't matter much. But I may not do a preorder for The Stolen Heart. --Should I have included so many mini-comics and art pieces in the book? It takes a huge chunk out of my Amazon sale price. I think I should have kept the delivery cost under 50 cents... In future books, I'll be scaling back on the art a bit because I just can't pay that much delivery cost per book.

--I think if I could turn back time I might have given the book a 90 day stint in Kindle Unlimited, Amazon's exclusive program. Although I hate the idea of keeping all my books exclusive to Amazon forever, so far I have sold exactly ONE book outside of Amazon. I'm pretty sure I would have made at least more than $2 through Kindle Unlimited page reads. I think promo and time are both necessary to make money on the other platforms and since I didn't plan a lot of promo, and time is not on my side right now (kiiiiiinda broke right now) I should have just done KU at first, then pulled it out for book 2 when I did more promo.

The Stolen Heart releases June 10th. I don't expect to see a lot of sales for The Vengeful Half until that book releases. Right now I am focusing on finishing book 3, and then I will start gearing up some more aggressive promo for book 2. This book probably won't be a shining star right out of the gate. Magical Mafia isn't really a hot concept at the moment, and it's also funny and has quirky world-building, which confuses some, and also has a lot of epic fantasy elements that don't become apparently immediately. But the readers who love it really really love it, so I hopefully I can find my people and not completely lose my shirt doing it...

I also think I might benefit from a "funnel book", a more commercial book that I can market in a more straight-forward way, but still tie in to the Hidden Lands world. I have a few ideas for other side series that might serve this purpose.

Despite not making a profit yet, I am ENJOYING myself 100x than I ever did writing my other books. I have never been SO excited to sit down and write every single day. It's amazing to be able to plot a five-book series and already consider the NEXT story arc, to foreshadow things that won't happen for a long, long time, and to include the comics and all the quirkiness that makes me keep returning to this world again and again. It's rare for an indie book career to take off with just one book, so I am not worrying about numbers much at this point. 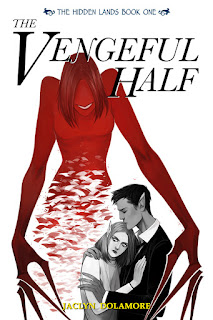 If you enjoyed this post you may also enjoy my post on Why I Decided to Self Publish, and if you want to be kept abreast of my publishing news, be sure to join my mailing list!: Jaclyn Dolamore's Writerly News
Posted by jaclyndolamore at 9:35 AM 3 comments: