Why comics and e-books have me questioning story structure

It is sometimes commented upon that until the internet happened, writers did not have so much feedback from their fans.

However, that was not true in the comics industry. Comics (at least, in this part of the world) have most commonly been told in short, chapter form with a letters column in the back, encouraging their fans to bitch and moan about the latest issue, or write tomes of effusive praise, or point out that Nightcrawler's hand had five fingers on page 15, panel 3, or whatevs. There is something else about comics, too: They were not expected to end. Ever. Can you imagine Superman ending and that's it? They don't end, they just get canceled if they aren't selling. A little like TV, but even more neverending, and without the structure of a "season" to hang that year's plot on.

There is something else different about comics too. Self-publishing is perfectly acceptable in the comics world. Many excellent comics began as self-published works, and some of them were picked up by a larger publisher from there, and some didn't. Although the comics industry is still dominated by superheroes, scratch the surface and the level of experimentation of not just art, but storytelling, in the comics world, IMO, is astonishing. And one thing I think is very fascinating is that comic creators can choose whether they want to tell one story with a beginning and an end, like a novel, or whether they want to tell an ongoing tale that can either be passed on to other creators, or end when the artist/writer simply gets burnout, or dies. 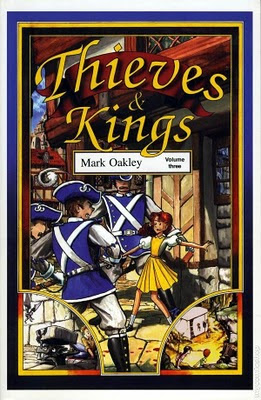 In writing, we don't really have that option. Sure, there are a few never-ending series, like in the mystery genre for example, but even then there are few examples outside of a fairly formulaic "every book solves a mystery" or "urban fantasy story where uh-oh, there's a NEW sexy vampire in town." There are comics that simply follow the slice-of-life dramas of a groups of characters. There are comics that combine slice-of-life relationship dramas with save-the-world traditional fantasy elements like Elfquest and Thieves and Kings (which also has prose sections within the comic). There might be story arcs, but there is no common rule dictating that the story should be a trilogy and then end...a level of freedom that FEW novels (I'm not saying none) manage. Of course, I'm sure the self-publishing element is part of it, and for every good comic there is a slew of bad ones, don't get me wrong.

Also, obviously there are things you can do in visual storytelling that just DO NOT WORK in novels. I bump up against the frustration of these limits all the time, as someone who once wanted to be a comic artist (but realized she doesn't have the patience with art that she does for writing). But I don't see why a serial story of short "episodes" in prose form couldn't work.

A friend of mine had a story on her blog some years back called MARZ Saga (she knows who she is
Posted by jaclyndolamore at 11:07 AM